Dealing with the 5 Levels of Conflict 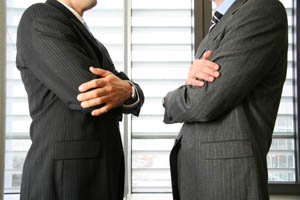 One thing that leaders will always need to be ready for is how to handle conflict.  Given that departments and teams are made of different individuals who may have different opinions, perspectives, priorities and beliefs, it is not uncommon that conflict will arise at one time or another.

If asked to define conflict, chances are most of the answers would be negative.  It is also likely that most, if not all, responses are connected to having some sort of disagreement.  It is important to realize, however, that not all disagreements may lead to conflict, although conflict is the result of most disagreements.

If caught early enough, conflict is relatively easy to resolve.  But how early is early?

There are 5 Levels of Conflict:

Level 2 – Episode: An exchange occurs, leaving you upset, irritated or angry.  At this level people have different opinions, misunderstandings may have happened, and conflicting goals or values may exist.  If it is not acknowledged, the conflict deepens.

Level 3 – Disagreement: Differences are debated, feelings are guarded, and the other person’s view is diminished.  Others may notice, but want to distance themselves from the problem to ensure they come out okay or to establish a position for a compromise they assume will come.  Information is vague and facts play second fiddle to interpretations and create confusion about what’s really happening.

Level 4 – Anxiety: The relationship is a source of worry, you begin to see differences as distorted, people choose sides and seek supporters.  Emotions become tools used to “win” supporters for one’s position.  Problems and people become synonymous, opening people up to attack.  Feelings are tense and the other person’s view is rejected.  You are mostly concerned with protecting yourself.

Level 5 – Critical Turning Point: Conflict has escalated, individuals feel threatened, and feelings become frozen or hysterical.  There is a total rupture in the relationship possibly leading to leaving a job and winning becomes the contest.

Effective conflict managers often take a temperature check to see what level the situation is at and respond accordingly. It is easiest to prevent conflict while it is still in Level 1 or 2.  Once it reaches Level 3, is it more difficult to manage because there are more feelings such as pride, fear or resentment is present.